Would you like to switch to the accessible version of this site?

Don't need the accessible version of this site?

At Nasa Chiropractic we take a team approach. We have an exceptional team of doctors that prides itself in providing high quality chiropractic care to each one of our patients. Our doctors will discuss your condition with you, educate you on possible treatment options, and find a treatment plan that will provide the most benefit for you. 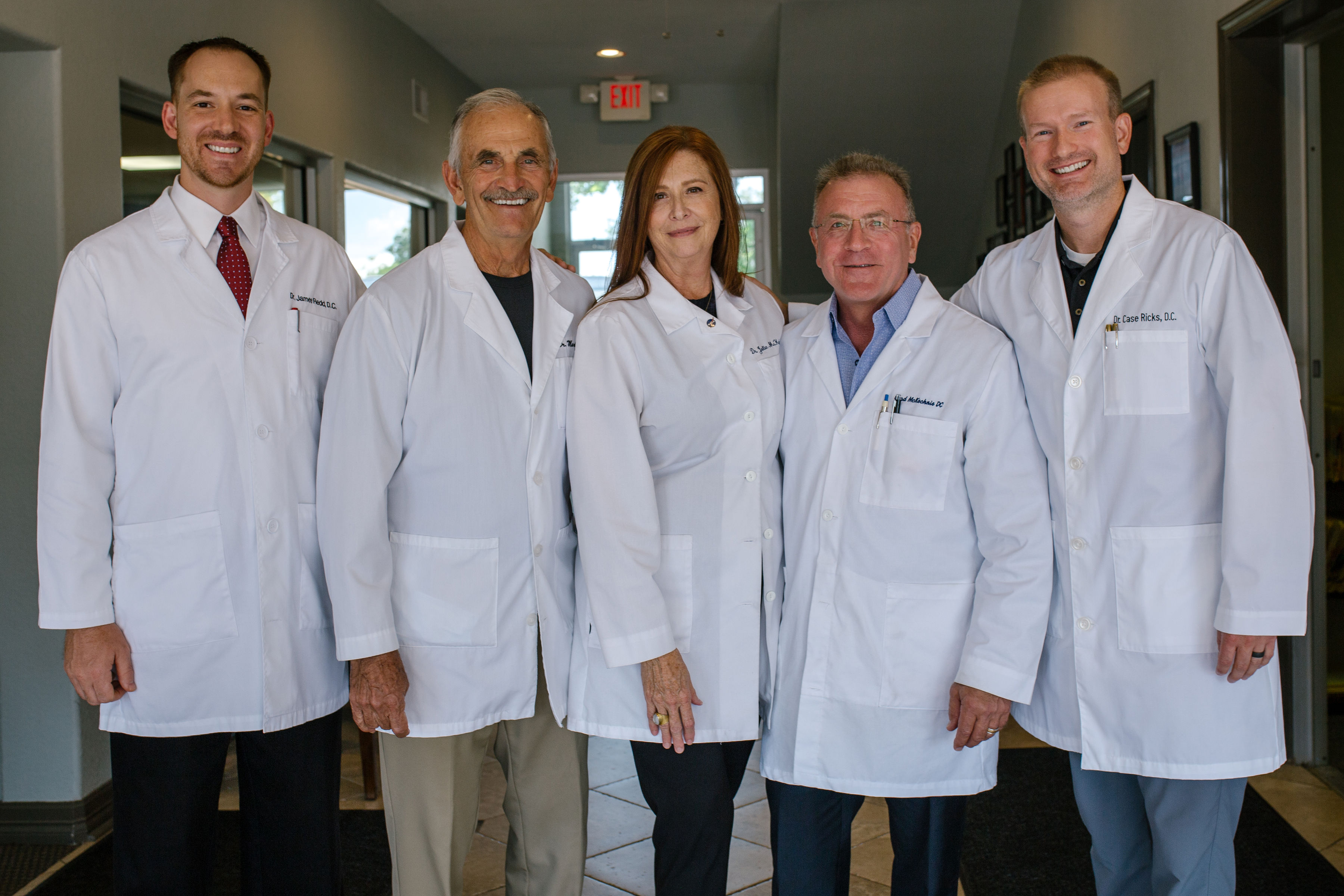 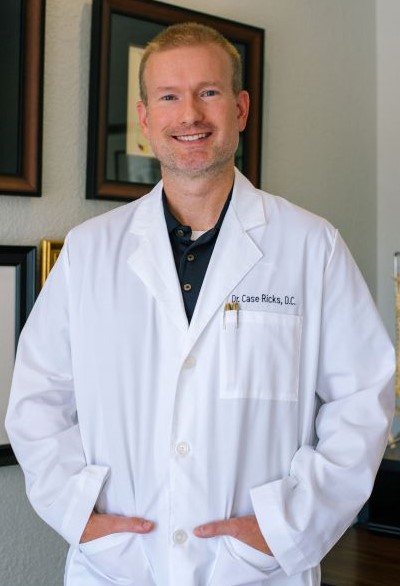 Dr. Ricks has been part of the team at Nasa Chiropractic since 2008 and enjoys serving the people of Clear Lake and surrounding areas. Dr. Ricks specializes in chiropractic care, sports medicine, rehabilitation, pregnancy care, and neurology. He is certified in the Webster Technique (pregnancy care), acupuncture, and the Kinesio Taping® method.

Dr. Ricks grew up with his family in Clear Lake Shores. He lived a very active lifestyle, graduating from Clear Creek High School in 2000 where he played varsity soccer for four years. He continued playing competitive soccer for Southwestern University's NCAA Men's Division III team in Georgetown, Texas. Dr. Ricks graduated from SU in 2004 with a bachelor's degree in biology and a minor in Spanish. Fluent in Spanish, he also spent time studying abroad in Chile and participating in medical mission trips in Central America and the Caribbean.

Dr. Ricks graduated from Texas Chiropractic College as the valedictorian of the spring class of 2008. In addition to classes at TCC, he enrolled in postgraduate studies in neurology and sports medicine. He also completed a hospital rotation with neurosurgeon Dr. Edward Murphy at St. Joseph's Hospital.

After completing his studies, Dr. Ricks returned home to build his practice at Nasa Chiropractic where he took over ownership of the clinic in 2014. He and his wife Allie have two sons and one daughter and reside in League City. Dr. Ricks enjoys serving in his church and spending time with his family. He keeps up an active lifestyle by coaching his kids’ soccer teams, hiking, and camping. 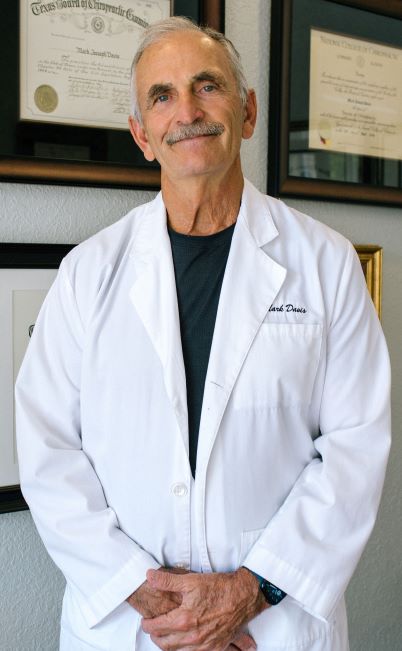 Dr. Davis acquired Nasa Chiropractic in 1995 and built it into a successful scientific-based practice. In addition to chiropractic manipulation, Dr. Davis specializes in motion palpation.

Dr. Davis was born and raised in Toronto, Ontario. He graduated with honors from Cornell University in 1972, earning a Bachelor of Science degree. While attending Cornell, Dr. Davis was a member of the 1970 NCAA Championship Hockey Team. After graduation he took a three-year hiatus to play professional hockey, benefitting from chiropractic treatment along the way. It was then he decided to make chiropractic his career.

Dr. Davis graduated from National College of Chiropractic in 1979. He completed his internship at Cook County Hospital in the Orthopedic Department and his externship at Chicago General Health. After finding his way to Texas in 1980, Dr. Davis joined Nasa Chiropractic and quickly became part of a large medical community. He served on the Board of Regents at Texas Chiropractic College from 2014-2016. Dr. Davis has also served on the Medical Quality Review Panel for Texas Workforce Commission since 2014 and has served as a Peer Reviewer for the Texas Board of Chiropractic Examiners since 2014.

Over the years Dr. Davis has competed in golf, tennis, sailing and canoeing. He also returned to the ice and coached the CCISD high school hockey team. At age 55 Dr. Davis started training for triathlons. He successfully completed several Half Ironman events and Houston Marathons. Dr. Davis called this "Reinventing Life.”

Dr. Davis resides in League City with his wife, Mary. He enjoys his semi-retirement, continuing to see patients while also spending time with his four children and four grandchildren and finding time for hunting, fishing, and golfing. These days patients often find Dr. Davis at The Fitness Center several times a week. 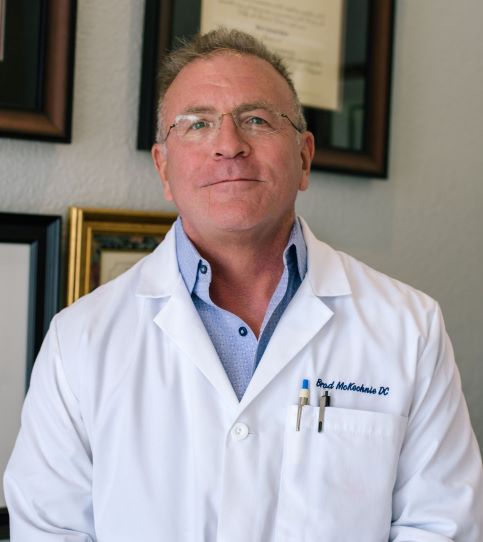 Dr. McKechnie lives in Friendswood with his wife, Dr. Julie McKechnie. He enjoys playing guitar and spending time with his children and granddaughter.

Dr. Julie McKechnie has been a provider at Nasa Chiropractic since 1999. In addition to chiropractic manipulation, Dr. McKechnie also uses acupuncture as part of her protocol when necessary.

Dr. McKechnie is a 1988 magna cum laude graduate of Texas Chiropractic College. She served on the faculty at TCC from 1991-1996 and has been in private practice since 1989. Dr. McKechnie has also completed postgraduate study and certification from Functional Medicine University. Many health care providers and leaders within the wellness industry agree that optimal health is achieved by 10% genetics (family traits) and 90% diet and lifestyle choices. Because lifestyle choices are so important, Dr. McKechnie is passionate about helping patients achieve a healthier life through chiropractic adjustments, optimal diet, nutrition, and exercise. Helping patients achieve optimal function and wellness through chiropractic care is Dr. McKechnie’s main focus.

Dr. Julie and Dr. Brad reside in Friendswood. They have a son, two daughters, a son-in-law, and, most importantly, one beautiful granddaughter. When not serving her patients or spending time with family, Dr. Julie enjoys going to church, reading, working out, gardening, trying new restaurants in Houston with Dr. Brad, and herding her three corgis. 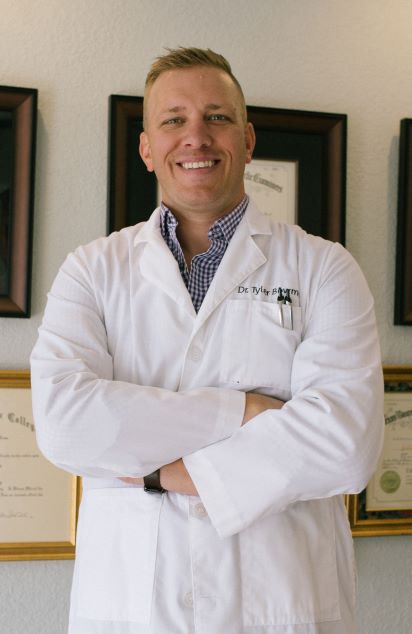 During his internships Dr. Bowman completed consultation and surgical rotations with orthopedic and neurology specialists in the greater Houston area. Creating close relationships along the way, Dr. Bowman is still active within the Houston medical community.

Dr. Bowman lives in Seabrook with his wife, Elissa, and their two children. He maintains an active lifestyle, regularly training and competing in Ironman triathlon events. Most weekends you can find him running, cycling, fishing, and spending time with his family. 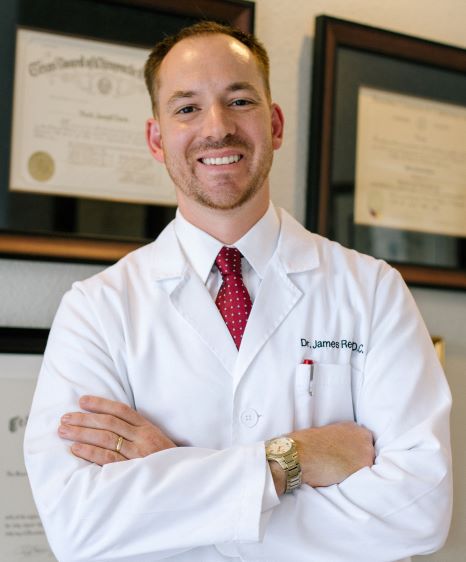 Dr. James Redd has been part of the team at Nasa Chiropractic since 2021. He specializes in chiropractic care, the Webster Technique (pregnancy care), pediatric techniques, cupping therapy, dry needling therapy, and acupuncture.

Dr. Redd was born and raised in the greater Pittsburgh, Pennsylvania area where he attended Waynesburg University. While there he met his future wife and moved south to be with her. He graduated from Southeastern Louisiana University in 2009. Due to his passion for helping others through service to his community and his innate ability to work well with his hands, he decided to make chiropractic his second career.

Dr. Redd graduated from Texas Chiropractic College in April 2021 with a Doctor of Chiropractic. While there he simultaneously pursued additional education in acupuncture from a Doctor of Oriental Medicine as well as family wellness through joining the International Chiropractic Pediatric Association (ICPA) and earning the Webster Technique Certification. He has completed his education with the Academy Council of Chiropractic Pediatrics (CACCP). With 200 hours in specialized post-doctoral education, he is well-suited to treat pregnant women, infants, and children. Dr. Redd also completed a national certification as a Certified Medical Examiner (CME) with the Federal Motor Carrier Safety Administration. As a CME he is able to provide Department of Transportation exams to those holding a commercial driver’s license.

Outside of the office, Dr. Redd spends time with his wife, Amy, and two children where they reside in Clear Lake. When not with them, you may find him cycling, fishing, or woodworking.

Find us on the map